GitHub required check stuck on "Waiting for status to be reported"

The workflow is launched just fine, and the referenced job - test - is green in the Circle UI, but however long I wait, the status on GitHub doesn’t change. I’ve noticed the problem only now, so don’t know how long it has been there, but I estimate that it has appeared sometime between October 21 and October 28, since I’ve seen a PR stuck on a commit from October 29, and I’ve done PR merges without issues the week before.

The problem sounds similar to this unanswered post (ignored…). I’ve gone through this procedure and I’ve re-run the workflow and the job in question several times, to no avail. No, I don’t have ci/circleci checked, only ci/circleci: test. This has worked before, the test job in circle.yml hasn’t been touched for over a month.

What I see on GitHub: 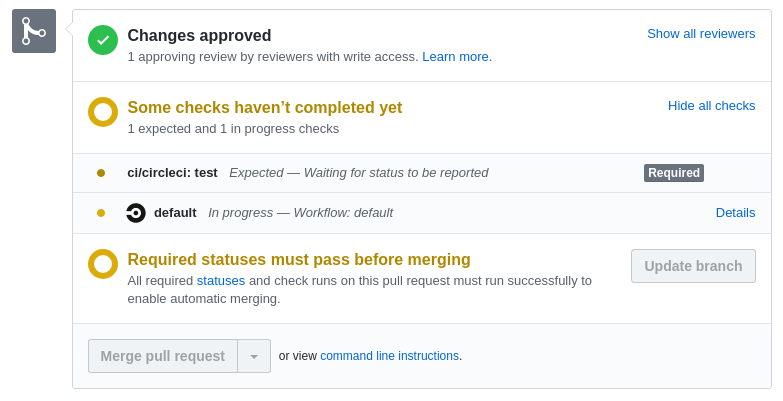 My team is having this problem as well. It seems that initial commits on PRs have their status reported successfully, but followup commits do not always. The problem might have started when we switched to using the new GitHub Checks integration (via https://circleci.com/blog/see-the-status-of-your-circleci-workflows-in-github/).

https://circleci.com/gh/triggr/triggr_api/10941 is an example run that should have appeared as a GitHub check but did not.

Same issue here… super annoying, no way to know if you can merge a branch or not.

I see now that this may have been an outage, since https://status.circleci.com/ now reports that GitHub check deliveries were delayed on October 30th-31st.

It’s frustrating that there was no status report at the time of the incident, and that this thread was ignored.

Fork pull request build did not display in upstream repo