The Xcode 12 Beta 4 image has just been released and can be selected as follows:

Since Xcode 12 beta 3, Apple has “merged” Xcode 12 and Xcode 12 for Universal Apps into a single release.

Users who were selecting Xcode 12 for Universal Apps with the 12.0.0-UA image identifier will be automatically redirected to the new Xcode 12 beta 3 image (12.0.0).

As a result of Xcode now being a Universal App, and including the Apple Silicon tooling, the resulting size of Xcode itself has grown, meaning there is around 6GB less free space on the new Xcode 12 images.

We are now shipping Cocoapods 1.10 beta as the default Cocoapods version. Cocoapods 1.9 has some incompatibility issues with Xcode 12, whereas 1.10 has much better Xcode 12 support.

For information on what CircleCI Support can, and can’t, help you with via support tickets, please see the following article: What is CircleCI’s Xcode Beta Image Support Policy?

We would encourage the the use of the beta image announcement threads to discuss any issues you may encounter with Apple’s beta software releases.

We will no longer be shipping Python 2 in our images due to it hitting EOL status and causing issues during installation as it is no longer maintained by Homebrew. If you require Python 2, we would suggest moving to a previous Xcode image, or creating your own tap for the Python 2 package.

We have bumped OpenJDK to version 11 (LTS) from OpenJDK 8 due to the latter being deprecated.

The following runtimes are installed:

The full manifest of installed software can be found here.

I’m facing an issue with Beta 4 (same issue in Beta 3) where I’m unable to install gems with native extensions.
I’m using Ruby 2.6.3 . Was wondering if this was something you are aware of or is there something I can do to solve this.
Thanks!
Brian

So I have been seeing issues like this regarding gems with native extensions since Beta 3 and it also happens locally. I believe there have been some changes to Clang which are causing it - most likely to do with making Xcode & Command Line Tools universal to support Apple Silicon.

We actually faced some similar issues when trying to build the image, where using the beta Command Line Tools caused native extension gems to fail - the workaround for this was to build everything with the 11.6 Command Line Tools.

Using a different Ruby version (such as 2.6.6 which is bundled in the image) may help. The system Ruby is problematic at the best of times!

If you want to downgrade the Command Line Tools in the image to see if this helps, you could use my fork of xcode-install to automate this (though I believe this also relies on a gem that requires native extensions): https://github.com/xcpretty/xcode-install/pull/378

Thanks @bytesguy
I’ve switched to using chruby 2.6.6 and it seems get get passed this.
However, using the chruby 2.6.6 command doesn’t seem to set my ruby version globally in my container.
I have my gemfile and .ruby-version set as 2.6.6 as well but on commands further along in my circle.yml file it seems to be picking up the system ruby of 2.6.3. 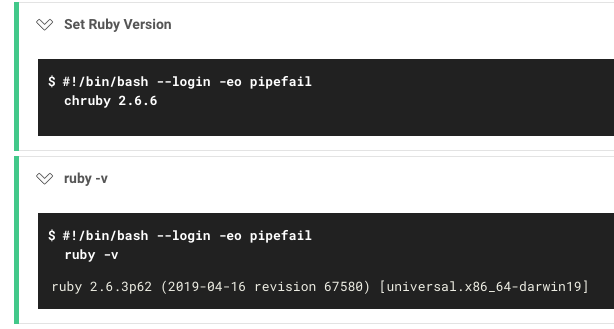 Do you have any best practices for using chruby? I’ve looked on the circleCI help/forums but there doesn’t seem to be any examples.

Basically a new shell is used for each step of the job, so this is why chruby won’t stick unless you add it to the bash profile - otherwise it just gets set for the duration of that shell being active.

Where exactly should I put

in my config.yml file?

Should it be run as a command? Or can I just add it on the top of the file?

It should be an additional run step added to your job, usually towards the start of the job run process. As an example, something like this:

@nbialostosky thanks a lot. That seems to work.

Also for others: setting ruby version to 2.7 seems to resolve the issue for gems with native extensions. At least it solved the issue for me with digest-crc.